“Firsts” are important.  Think about it.  Your first childhood memory.  The first time you actually swam underwater.  The birth of your first child.  All of these are memories and events that shape us to become who we are and reveal what we have become.

My first encounter with the power of a tornado was 20 years ago.  My wife and I were preparing supper.  The 6pm local news was on the television.  Just before a commercial break, the weatherman mentioned (in that most disquieting but attention-getting way) 3 locations in our state where tornadoes may be on the ground.  Upon seeing the radar image, my wife and I agreed – one potential tornado appeared to be exactly where my sister lived.

A number of telephone calls filled the evening.  My sister could not find her husband or their 2-year-old.  He eventually contacted her from a restaurant where he was getting supper for their daughter.  They were reunited after supper, and they eventually made their way to their house.

My sister reported to me that the tornado had taken the entire roof and about 40% of the walls.  I remember thinking “She’s in shock … she’s probably exaggerating … the damage isn’t that bad.”

The next morning, we met them at their home’s former location.  My sister’s description was more accurate that I wanted to believe.  Only 60% of the walls were standing.  None of the roof was intact…(in fact, I only found 1 three-foot-square piece of decking and shingles within 100 yards of the house.)  One can imagine the clutter of items strewn throughout the house and surroundings.

Another image that stays with me: the winds were so fierce that grass from the adjacent field had been wrapped tightly around the individual strands of barbed wire on a nearby fence!

The memories of that day, and of other subsequent “severe weather outbreaks” near our home, made the chaos and damage of April 27, 2011 even more exceptional.  That day, the Pratt City neighborhood (and other neighborhoods) of Birmingham were rocked by multiple tornadoes.  The loss and agony of that day’s events have marked it securely in my mind and in the minds of many.

That’s one reason why I was particularly pleased when the City of Birmingham selected Herrington Architects to help design “Safe Rooms” for many of its neighborhoods.  (FEMA uses “safe room” to describe a structure specifically designed to meet FEMA P-361, Safe Rooms for Tornadoes and Hurricanes: Guidance for Community and Residential Safe Rooms, providing “near-absolute protection in extreme weather events, including tornadoes and hurricanes.”)  The City determined the “image” or appearance of the Safe Room as it prepared the application for a FEMA grant. 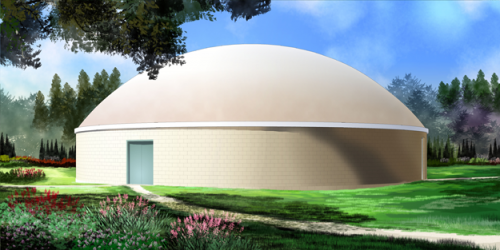 Working with the City’s representatives, Metric Engineering, Inc., and other consultants, our firm has completed the design of safe rooms for 2 neighborhoods. Construction has not commenced, but we look forward to the day when more residents of Birmingham have a means of safety in a storm.

Wishing each of you all the best,
Bruce Herrington

Previous Entry: Things I Love About My Work
Next Entry: Under Construction